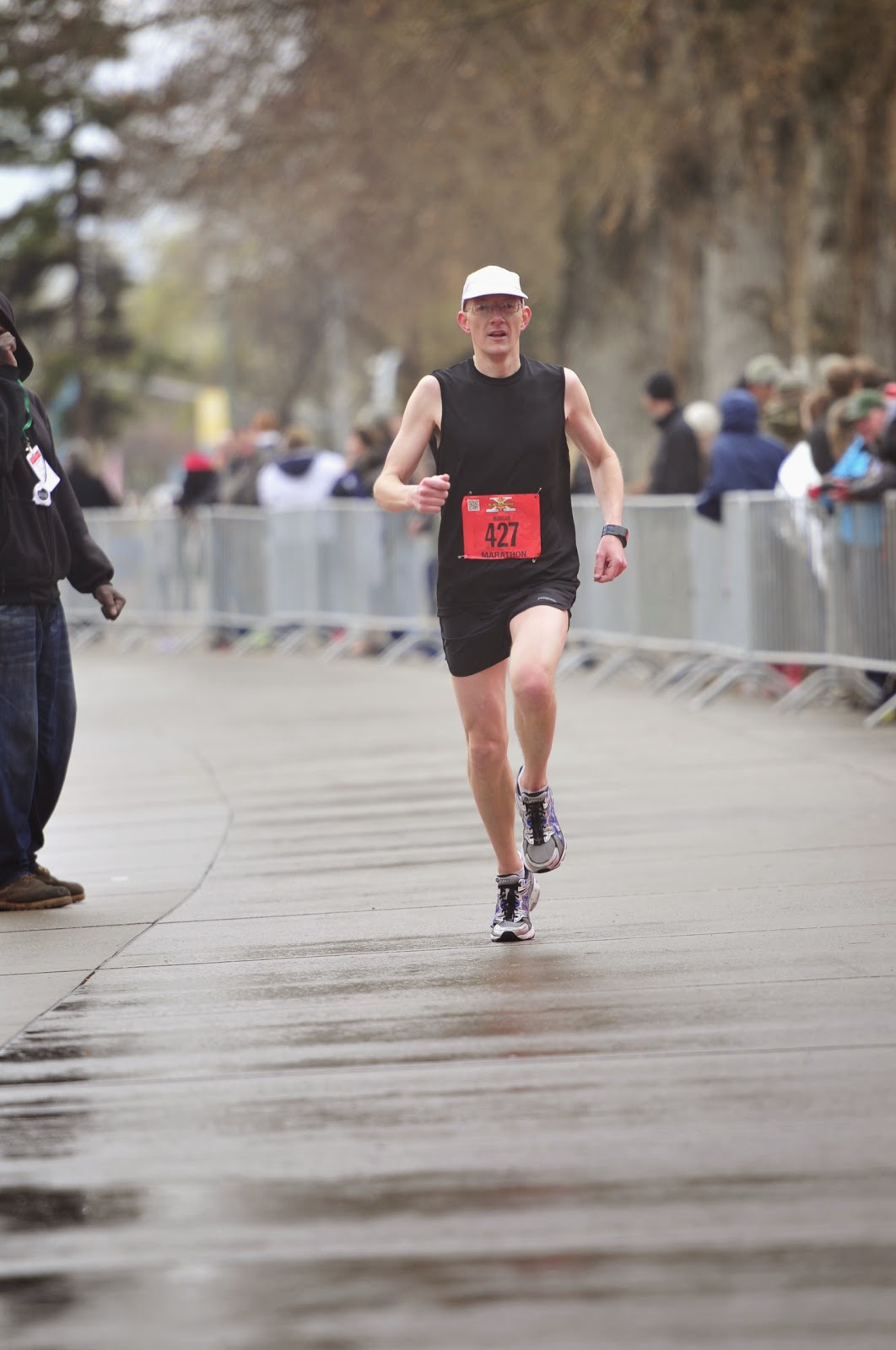 New year started. I hadn't signed up for another race. Had to find one. Decided on the Salt Lake City Marathon. It was close and would be easy to knock out.

Since my last time in a full was 3:34 I was hoping to break that record by a few mins. By the time the race came, I had some good long runs in and had been doing okay with nutrition and rest. I was doing some intervals a few weeks prior and ended up making my hamstring a little sensitive, but it didn't hurt any more while running and I was too stupid to let it keep me from running.

This race was probably the first race that I actually intentionally went to a thrift store to pick up some throw away clothes. I got a cheap fleece pullover and a cheap windbreaker jacket. For 10 bucks, they were the perfect items to just toss at an aid station as I ran by.

I had everything arranged and left with plenty of time to spare for the start. It was raining. I chilled in my car for a few mins eating some gummy bears and got my stuff all ready.

This race was just a week after the Boston Marathon Bombings so there was some discussion on if it should be cancelled or not. Luckily, sanity prevailed and the race went on, albeit with more security than had previously been arranged.

The start of the race was great. The light drizzle made it cold and people were anxious to get running. As the race was about to start they played the song “Sweet Caroline” by Neil Diamond. Everyone sang along and I thought it was pretty cool. Apparently that’s the song that’s played at Red Sox games.

The race started at the University of Utah Campus which sits up on the hills east of downtown Salt Lake City. So as the race went away from the campus the course went downhill.

My pace at the beginning was slightly higher than I was expecting but the downhill and the excitement of the race got to me and I just went with it. The rain got harder and softer occasionally and I was glad to have on my fleece pullover. I tucked the sleeves over my hands and was in much better shape with it than without it.

Eventually there was a break in the clouds and the storm was on its way out. It was about mile 15 that I ditched my pullover and kept up the pace. I was feeling good.

There was a few people that I was running about the same pace as and they had been pacing me as well. I was certain that one person that was always ahead of me was going to speed up and finish way before I would. Eventually though, about mile 21 he faded, and quick. I tried to encourage him and keep him going but he had hit a wall and wasn't able to keep the pace to the end.

The Salt Lake City Marathon shares the same start and finish line as the half marathon but I was still surprised to see half marathon participants on the course as I was coming up to finish the full. My pace had been good so far. But my comfort level was anything but desirable. I was hurting pretty good. Every time my legs hit the ground they were screaming that they were done. But I knew I didn't have very far to go. I finished in about 3:20. It was a time I was very happy to get.

While I’m not likely to run the Salt Lake City Marathon again – mainly because there are so many other races that I want to try – I still am glad that I ran it. It was a great experience.
Posted by bigdrop at 08:00