2019 is going to be filled with a lot of races. I need to save and record some of my experiences. I expect 2019 to be a great year of running.

I got up and it was cold. This race is the coldest race I've ever done. Standing at the start waiting for a timing glitch to be worked out did get feel pretty cold. But then once I got running and there was a head wind, it felt much colder.

Going in to the race I didn't really do a lot of research on the course and I didn't know what to expect as far as uphill or downhill. I was really expecting it to be more or less flat. But I was wrong. With my expectation that it was going to be pretty flat I was hoping for any time less than 20mins would be a good time for me. 18 minutes and something would be great.

Once the race finally started I got going. And from that point I rarely looked at my watch. I just went as fast as I though I could.

I was right near the front when we started and after the first quarter mile or so there were about 15 people ahead of me. Maybe? Anyway, I just went as fast as I felt I should go knowing that it was a short race. I wasn't really concerned about the people ahead or behind. I was just trying to do my thing.

Once we got about a mile in there was a hill. And I did pass one or two going up the hill and I just kept going.

At some point, maybe about 2 miles, I tried to count the people ahead of me. Unless there were some really fast people a head of those that I could see I figured I was about 7th place or so. Finally the last mile I found some folks who had gone out too fast and they just bonked. I passed them while trying to encourage them to keep going. I didn't chase anyone else down and I was fairly confident that no one was behind me that was going to catch me.

I couldn't stick around at the end of the race but once I got the results I was happy with how things went.

Overall I was 6th.

I was the 4th place male.

I was first in my age group.

The official time was 19:42 - And with the hills and the wind and the fact that I was just on the tail end of running a 50 mile week. I am very happy with this result. 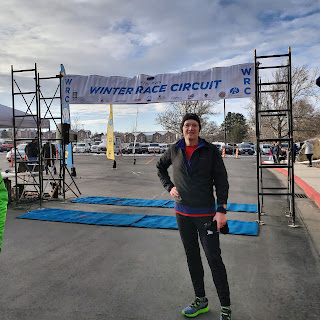 I'm Morgan. I like to run. A lot. Follow me for race reviews of marathons, trail races and ultra marathons around the Western US, especially Utah.

Running Through the West