Before I finished my first marathon I had already entered and won the lottery for the St George Marathon. I was pretty excited about moving from South Korea to Utah and having already had a few races under my belt I knew that I wanted to keep running. Since the St George Marathon was still a few months out I had plenty of time to get moved and trained well enough to do this race.

The St George Marathon would be my 2nd full marathon. So I had a few lessons that I had learned in Seoul that I was going to use to improve my performance in Utah. The first thing that I learned from the Seoul Marathon was that I wanted to have more long runs before race day. At the time of the Seoul marathon I had only gone above 20 miles once and got up to 18 miles one other time. The rest of the training runs were all less than 15 miles or so. I wanted to have more long runs to learn more about how things feel once you have that many miles on your legs and also to help with bonking. I bonked (that feel of total exhaustion that some people get after about 20 miles) hard and wanted to know more about what to do and how to pace myself so that I could avoid bonking or at least learn more about how to deal with it.

The other thing about Seoul that I learned was that my desire to run faster was hindered by my weight. How much faster can a person run if they have 20 less pounds to haul around? So soon after Seoul I started paying attention to my calories and eventually lost about 20lbs. I knew that had to make me faster and put less stress on my joints – so it was win win.

For training I focused on running between 30-40 miles a week and ran long runs on the weekends.
Race day came and I was hoping to run about 3:40. I had run a 3:52 in Seoul and didn't want to set my sights too high. It was a completely unknown course and the overall elevation would be much higher than Seoul. 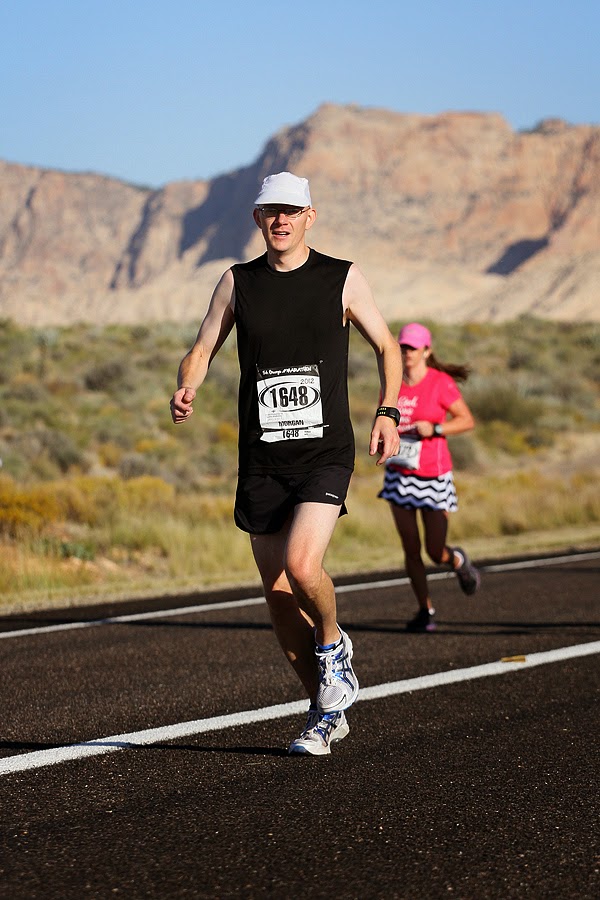 The St George Marathon offered a good expo as far as expos go at least. I have strong opinions about expos that I’ll keep to myself at this point in time. But the bib pick up was easy and I was back to my hotel to try to get some rest in no time.

I got up the next morning and had my brother take me to the buses. The bus system was excellently run and the length of the bus ride seems just about right to me. Before I knew it I was standing outside around a fire in the town of Central, Utah anxiously waiting for the race to start. This year was pretty cold and I wasn't as prepared as I could have been. The drop bag system was new to me so I was worried about my stuff getting stolen or lost so I didn't pack anything that I thought was very valuable or could live without while I was standing in the cold for about an hour.

I eventually ate a peanut butter and honey sandwich that I had brought and a banana and then got in line for the porta-johns. Despite having so many bathrooms I was surprised at how long the wait was. By the time I got out people were lining up to get ready and I dropped my off my bag and made my way over.

Up to the point of writing this I've ran 5 full marathons. If running a marathon in Afghanistan is the least beautiful of all of them so far then St George is the most. Starting the run in the dark is definitely cool and there is little light for a the first few miles. As the sun rises it gives way to the beauty that is southern Utah.

Aside from the grand views the race is also very downhill. There are some portions that climb but overall, there’s a lot of elevation loss between the start and finish. For this race I was heading for a 7:45 pace which at the time was fast for me. But the weather was perfect and I was feeling pretty good.

The first big hill is the climb out of Veyo, Utah. There's an aid station just at the bottom where you can fuel up and get ready for the grind. It is not a small hill by any means. I think everyone has to slow down a bit and tough it out. The top levels out slowly where I was able to return to a normal pace.

Each of the aid stations were very well stocked and I had no problem getting what I was looking for. The volunteers were excellent and I was never slowed or hindered by them.

The weather this day was just about perfect. I think that the people finishing in about 5 hours were probably pretty warm by the end, when I finished it was perfect.

The foremost thing on my mind was pacing myself correctly. With the excitement of the race some have a tendency to run too fast and then paying for it later. This exact thing happened to me in Seoul so I was determined to maintain negative splits (gradually increasing speed). So every 5k I would monitor my pace and adjust accordingly.
The downhill helped me out a lot and I was feeling pretty good. I remember thinking about mile 20 that it was easy because I was feeling great. No less than 2 miles later I was not thinking the same thing but I was able to maintain my pace and finish in 3:34.

The aftermath wasn't pretty though. My lack of running downhill during training meant I paid dearly for several days afterwards. By Monday, walking was difficult at best and going downstairs? Forget it. But I still loved the race and plan to do it every year I can. It is probably the best road race in Utah.

If you can, run the St George Marathon. You can even use it as an excuse to go to Las Vegas and the Grand Canyon.
Posted by bigdrop at 20:49