I ran a 50 mile race this year and I didn't feel to bad after. I wasn't that sore and was running the next Monday. 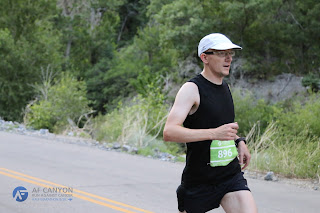 This half marathon has completely totaled my legs and now (being the Monday after)  I can barely walk. I figure it is due to a few factors: First, I pushed myself very hard. I was at my limit for the entirety of the race. Second, it was downhill and on pavement. The majority of the downhill I have done this year has been on trails and at a much slower speed.

Here's a quick breakdown of how the race went:

The race started on time at the Tibble Fork resivior and the road went immediately down. The one thing that always sort of throws training out the window is how the course actually is vs what you actually run. Yes, I guess you could train very specifically to a course, but I don't know how many people do on average.

So they say not to start out too fast and to finish the race faster than you start. I think this works well for a flat course but what about hills? This course starts down and ends a little bit flatter. So to me the begining is where you can really make good time because you're going downhill and that takes less effort than flat or going up.

Anyway, I started pretty quick and by the time the 10k point hit a PR for 10k. I was going pretty fast. knew right off the bat that I was probably going faster than I really should be going and faster than I really needed to go. But I was running the shortest race I have done yet this year and I wasn't planning on taking it easy.

The crowds thinned out as the miles ticked by and I was still doing just as well as I had expected. Some runners passed me and I passed some as well.

The canyon is very pretty and one aspect that I like most about American Fork Canyon is how steep the canyon walls are. There are some big cliffs and this perfect June morning I thought was a great way to enjoy it.

The course eventually lead out of the canyon and went to a small bike/pedestrian trail. This is where things started to get rough for me and I had to really work to keep up the pace.

The last 5 miles or so wind through the valley and although the overall course profile is downhill, there were some ups and downs where I think everybody had to slow down a little and push up before returning to a faster pace.

The finish line could be heard from about a half mile away. At this point, I didn't know if there was anyone behind me or how close they might have been. I think that my mind was playing tricks on be because the entire last quater mile I was convinced there was going to be a pack of about 10 people pass me. Lucky for me it was all in my head and even now, i'm not sure how close the person behind me was.

The finish line area was great. The Kneaders french toast was by far the best post race food I'd ever had at a race and was worth every calorie.

Would I run this race again? I think I would. I was surprised how smooth everything went. All elements were executed perfectly in my opinion.