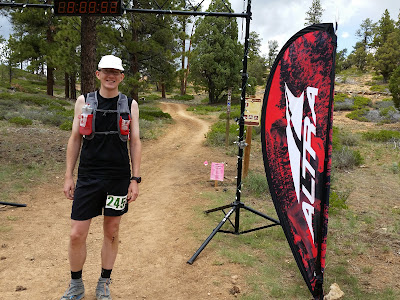 I had forgotten to pack a beanie and got one for 6 bucks at the general store because I thought the possible discomfort of a cold head was worth avoiding for the cost of a cheap beanie. I don’t think I ended up really needing it, but I had it and that was worth it to me.

After we loaded on the bus and got out to the start I was feeling pretty good and looking forward to the run. I was a little worried about the weather which always puts me on edge regarding what to carry with me. I don’t like to carry too much stuff and I’d hate to get rid of something I that I might need later. However, I think I was wearing what most other people were not wearing, or what I think most people were not wearing, which was clothing that I didn’t care if I didn’t get back. Don’t get me wrong, I think an awesome lightweight windproof/waterproof garment is worth more than its weight in gold, but there’s something to be said of the value of a garment purchased at a thrift store for less than 10 bucks and being able to throw it away without a care at any point. I had on a cheap windbreaker thing and a fleece jacket on under that. Sure, it wasn’t winning me any fashion points, but really, did I care? Nope. It broke the wind and insulated me for about 12 bucks (and I’ve had and used these pieces for several races).

After hanging around for a few at the start the race was on. The weather looked a little scary but up to this point hadn’t done anything but bring some dark clouds to block the sun.

The first climb in this race goes to the highest point within about the first 8 miles. There was a little up and down on a single track trail but then the course hits a dirt road and you stay on the road and go up and up . I was feeling fine and just before I got to the steeper sections of the climb decided to ditch my fleece jacket and cheap beanie. I also put my wind breaker in my vest and decided to keep it just in case. It wouldn’t save me in a massive downpour, but if the wind got cold it would keep me a little bit better off than without it. And I could ditch it at an aid station without caring if it was gone. I also kept my cheap wool gloves incase my hands needed some warmth.

I felt good after losing that weight and then realized that I had 2 full water bottles on me and wondered why I was carrying them both full. One was empty a few seconds after that. I knew I didn’t need that much at this point and could get more fluids at the first aid station.

I could see that there were 6 people ahead of me. I was fine with that. I was hoping that one or two of these people would fade later in the race and that would put me pretty close to the front of the pack. That’s where I wanted to be and I would be happy staying there.

The climb to the highest point of the race spread out the field. The first 3 people were quickly out of my sight and I wondered if I would ever see them again. The other 3 were going about the same pace as me. I didn’t catch up to them but they didn’t get any farther ahead.

Going up to the top of the first pass one of them started to slow a little. I eventually was running with them and then passed them going up. I would never see this person on the course again until the finish.

The next 2 guys ahead of me were doing very well. They were staying about 100 yards ahead of me and I wasn’t able to make time on them.

Once the course started going down the weather began to be a little less cloudy. At times the sun would come out and the wind would gently blow. Both were welcome to a certain extent.

The first aid station came pretty fast and I noticed that the 2 people just ahead of me didn’t even stop. I was surprised by this because I knew that even though I wasn’t planning on stopping for long, I was still going to get some food and move on. Which I did. I grabbed some chips and a fig newton and some sort of sports drink and I departed quickly. The people ahead of me were now way ahead of me and I only would catch occasional glimpses of them. I looked behind me every so often and saw no one that I thought was gaining on me.

So I was now in no-man’s-land. I was alone for basically the rest of the race. I didn’t know how close the person ahead of or behind me was. After the 2nd aid station there would be occasional runners on the course that were part of the 100 mile event. They were always nice and would yield to me as I shuffled by.

Trying to remember the course from the previous year was somewhat helpful even though I was now doing the same course in reverse. But then it was also not very helpful because my memory was always thinking that it was shorter than reality.

I got to the 3rd and final aid station knowing that I probably wasn’t going to catch up to anyone a head of me and maybe no one would pass me. Within about 10 seconds of arriving at the final aid station a runner, which I had previously passed in the first half mile of the course, flew by me. She didn’t even stop at the aid station as far as I could tell. I stayed there for maybe a minute or two at most trying to get a few more calories in to my system before the final climb to the finish. Some pb&j, coke, sports drink, and I don’t remember what else were quickly consumed and I was off.

I was certain that the climb would begin soon – but it didn’t. It was much farther than I had imagined to the beginning of the final climb. I decided to commit to a walk-then-run approach. I would do this to get out of the canyon and on to the level part that would eventually lead to the finish. I have to say that it was mostly a success. I was able to run and walk despite my legs being pretty well depleted of any desire to go up anything. But I kept going. I discovered that shorter steps were better than long steps going up. I did my best to stay focused and move as quick as I could.


I was now passing some of the 100 mile runners every 10 minutes or so. I passed one and within about 10yards of passing them my right foot didn’t clear a rock and I went down. I bashed up my left knee a little bit and my hands were slightly scraped. It was a real surprise to me as I didn’t see it coming at all. I had to walk for a little bit after that but decided that I had nothing else to do but run to the finish. I didn’t have any first aid on me and didn’t see the point of using water and my dirty hands to rinse it off.

The climb up to the finish was much longer than I remember. Without a doubt it was absolutely beautiful. The trail was awesome and all the colors of the dirt and rock formations were just stunning. But the climb was long and seemed to never end.

My watched beeped at the 45 kilometer mark. I know that my steps are about 300 for every mile. With about 3 miles left and a little bit of approximation I decided that I would count 1000 steps and then I would decide what to do next to keep me going to the finish. The step counting went well to occupy my mind. I eventually passed someone who I think might have been one of the people that were ahead of me earlier. But I wasn’t able to really think at this point about who exactly it was.

After the step counting had gotten me through the last few miles I saw a family on the side of the trail who said something like “you’re almost there!” and I didn’t really believe them. I was convinced that I probably had about another 15mins of running or more. Just as they were behind me I crested a small rise and saw the finish. I don’t think I ran that last 100 yards very fast, but to me the time it took to get there was nothing.

Overall I’m pretty pleased with how I did. I know I’m a better climber than I was a year ago and during the whole race I never really stopped or had any major problems. The weather turned out to be a non-issue. In fact, I got sunburned a little on my arms where my sunscreen coverage was lacking.

If I have any lessons to learn it’s that if I want to do even better I need to practice hills as well as running at elevation more. It’s hard to get out and get as high as I need in order to train so that I can perform at the higher level. But seriously, I can’t be too hard on myself, I did pretty darn well.
Posted by bigdrop at 19:01