I have not been getting enough vertical in my training for Speedgoat. So, I had to make an effort to get at least some elevation gain this week. Hey, I live it a city that is flat and the nearest mountains are not so close that I can get to them, run 5 miles and get back in under 2 hours. Anyway, enough with the excuses.

Mt. Ogden became my desired run. One other thing I need to do is to get more familiar with the trails in my area. There are a lot. And I have not done a lot of them.

Mt. Ogden because I thought it was going to be pretty runnable and it could help me get up to the elevations that I need to be at for Speedgoat (although just barely).

Got up and made it to the trail head with no issues. But there is more than one trail that intersect at the beginning so I was guessing a little at first. I made one bad turn that was about a 20 second mistake. Not quite as bad as Jim Wamsley at Western States this year at least.

Well, the route was runnable except for the overgrowth. The canyon that the trail starts in was very lush and green and the trail was overgrown by many plants. So this made it difficult to see my feet and where they were falling. Sometimes there would be large rocks and roots that would not be seen. Luckily I didn't have any major slips, trips or falls. However, I was slowed down a little bit by it all.

Eventually the trail leaves the canyon and for maybe 2 miles the trail is clear and some time can be made up. After this though, the trail just goes back to being overgrown and rocky - but this time with more stiff bushes and branches that scratch. It's really not that big of a deal, just more of an annoyance.

After a steady and consistent climb the trees and the bushes dissipate and it turns in to just a rocky trail on the side of the mountain. For me at this point I was just glad to be moving forward. I had really forgotten about my average pace and just wanted to get to the top.

The best part came up about here when the trail was not too steep and I was able to just put my head down and move up the trail at a nice consistent pace without obstacles like large plants and rocks. The trail even goes down a little bit and that was great to get a few feet to make up on my time.

Finally the trail comes to the ridge and the top is about 1/4 mile away. But it is also probably at 9300 feet or so in elevation and much more steep than the last mile on the trail. I was hoping to be able to run the rest of it but it was not to be. I had to just power hike and keep going as I could.

Luckily I did make it it good time. About 1hr 45mins to the top from the Beus parking lot.

At the top I enjoyed some great views and a cold breeze. My hands got cold and I had to get home to do stuff. So snapped a few pics and got out. My hands hurt until I got lower and the air warmed.

Just over 11 miles and 4500 feet of gain. Aside from the overgrown trail, no other complaints for this guy. 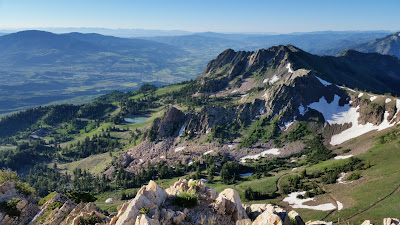 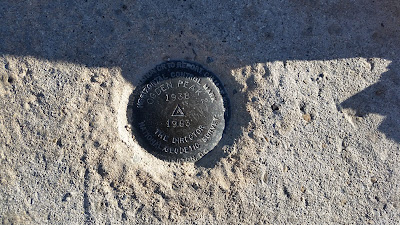 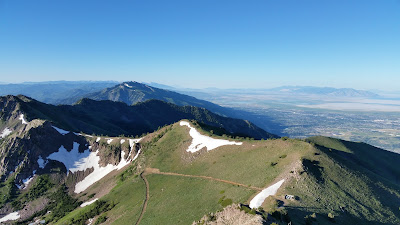 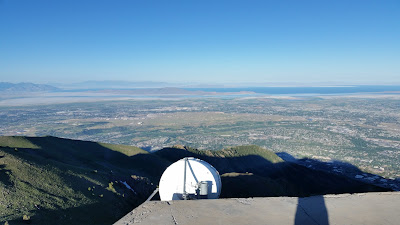