Drove down. Got the bib and shirt and things. Got the things ready. Slept. Got up. Bathroom. Got ready. Had a peanut butter and jelly sammich, a banana and some gummy bears. Race started. 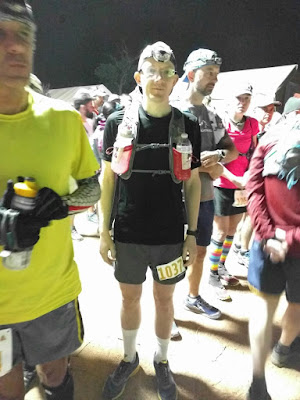 This is where the adventure begins. But first, let’s go back. This was my first 100k and my training could have been a little bit better and mentally I think that I wasn’t in the most ideal place to take on this race. But I was still going to run it and I was still going to do the best that I could. I was very afraid of going out too fast and then not having enough left over for the rest of the race. So the whole race I was just concerned with not pushing too hard. I didn’t.

The race starts going out and pretty much instantly climbs up to the Flying Monkey aid station. With well over 250 runners going up the single track trail it’s not easy to pass. Since I wasn’t going out too fast, I just stayed around where I was and I didn’t try passing the 100 mile runners or worrying too much about it. So that climb was a fair amount of walking but no problem. Eventually we got up to the aid station and then the running could really continue and the crowd thinned out a bit. I was fine with where I was and just kept going. The scenery was beautiful and the 4x4r trail was plenty of fun and nothing too difficult to manage.

Came up to the Flying Monkey aid station again and made sure I stuffed down a few calories. A handful of M&Ms did it for me. The descent from the aid station was surprisingly a little harder to run than I was hoping because of the steep and rocks but once the trail got a little smoother I was able to pick up a few miles going faster. 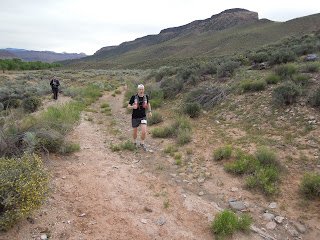 Eventually the trail made it’s way to the Dalton Wash aid station where I got some more food, water, and all that. I left the aid station and continued up the hill to go up and over to the actual Dalton Wash road that goes up to the next aid station. The road was smooth and very runnable and I was able to keep a decent pace. Eventually I thought about the hill and how it was probably the last really runnable climb of the race. The next climb after this one I knew it wasn’t going to be runnable so I decided that I would try to get up this hill a little faster rather than just walking up it. So I did a little bit more running than walking until I got to the top.

Next aid station: Guacamole. Got some food and didn’t hang out too long. As the trail continued it turned to being a 50/50 mix of sandstone and dirt. But the trail was in a constant state of flux between the two. Sometimes it would be rock and runnable then it would turn to a short sharp drop off or a steep short climb. Both of which needed a change of pace to transfer. So it’s not always the easiest to keep a fast pace. But I was able to keep my desired pace of 11min average for a few of those miles. No problems. Got back to Guacamole aid station and continued on making sure I was eating and drinking enough.

Got back on to the road that goes down and back to the Dalton Wash aid station. Be careful what you wish for. I sort of wanted to be running fast when I was on the Guacamole trail but then when I was on the road it was a boring death march of just a boring dirt road. Well, at least it was going down and at least I was going a little faster and at least I was getting my overall average pace down a little bit, too. So it wasn’t all bad. At this point I was feeling okay. My plan all along was to change my shoes at the next aid station and I was looking forward to it. The shoes I had had on thus far weren’t my favorites, but as it has turned out have performed well enough for the job. There was a decent climb up to go up and over back to the aid station and it felt good to my legs and lungs to get that change in.

I got to the aid station and changed my sock and shoes and at some food then kept going as well as I could. It got a little cloudy but the temperatures were nice and there were no problems. I just kept going as well as I could to get up to the bottom of the next climb. I made it up the next climb by mostly walking as it was at least a 30% grade, if not more in some spots. The next aid station, Goosebump, was welcome and I don’t remember spending a lot of time there but I do remember not wanting to eat anything but pretty much forcing myself to eat some food. I really didn’t want to. So I just took some bacon and some other stuff. I remember leaving the aid station with 2 oreo cookies and I carried them for a few miles. I knew I had to eat it but I really didn’t want to eat it. I think I ate some and eventually just chucked the rest of it.

The trail up on this mesa wasn’t too different from that of the Guacamole trail. Lots of transitioning from rock to dirt and back. Up and down left and right and just a constant roller coaster for the majority of the time. There’s no real chance to just turn off and tune out and just go forward because you gotta stay on the trail and that requires the metal work of noticing the trail makers and not getting carried off in a direction that “feels” like it’s the course. I got turned around once or twice but no big mistakes that set me back any significant amount of time.

By this time, my poor old watch just didn’t have the juice it once did so it was beeping at me that the battery was dying and I was annoyed with it anyway and didn’t want to look at it because I was either going to get depressed or upset at what it was telling me. (I was running as much as I could so screw my friggin’ watch and its “data”) So it eventually just died and I had a useless electronic strapped to my wrist. No idea and no clue what my pace was or if I was doing okay or not.

A mixed bag of emotions with not having a source of objective information about where I was and how I was doing. I was now, mentally, just wanted the race to be over and wasn’t concerned with advancing or seeing any real benefit to pushing really hard. But then since I didn’t have any information about where I was it was hard to gauge how far it was going to be to the next aid station or the finish. So I did the only thing I really could do, just move forward. From Goosebump the second time to the next aid station I did the best I could but I wasn’t really feeling very energetic and didn’t have much motivation but to just run the flat and downhill parts and walk the uphill. I did what I could. Eventually I caught up to a female runner who wasn’t feeling great. We chatted a little and eventually had to pass her. 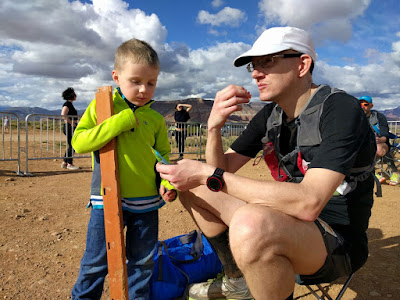 Virgin Desert aid station was next and it was welcome. I didn’t spend a lot of time there but did get some gummy bears and some water and I felt alright. A nice guy from Vancouver asked me if I’d like to run to the finish together and help each other out. I couldn’t argue with that. So we set off. I was feeling pretty hammered but not totally destroyed. I had to walk the uphills but was still moving forward alright I thought. This kind of worried me as I was thinking that I maybe I should feel a little bit more tired in my legs than I was feeling. Eventually our partnership ended - I had to keep moving and my buddy was needing to walk too much. It’s not like I was going that much faster but I was not really willing to walk. Ended up only about 2 minutes ahead of him. 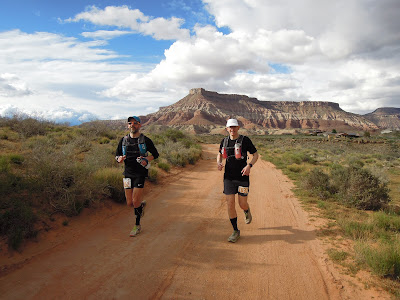 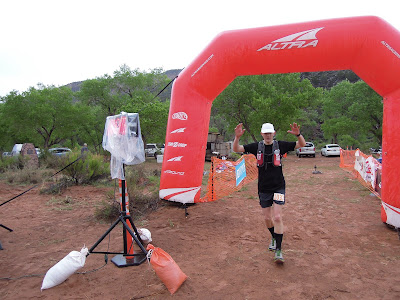 The rain started and then the ground really got muddy but luckily this was only about a half mile from the end of the race. Reaching the end was glorious and was very happy to have it over and to make it the whole way.

Getting back to “normal” took a while. I didn’t have much of an appetite and I didn’t really want to move. We got to the hotel and I bathed and got cleaned up but then just laid in bed. My legs were on the verge of cramping and I did what I could to just relax. The next day my body was still very tired and fatigued, but I could walk and it really wasn’t that bad. However, I just didn’t feel like my body was all the way back to normal operations. Anyway. A few good nights sleep has remedied that and I’m feeling fine now. Let’s do it again!

However, the bottom line is this: I love running, and trail running especially. Being out there during the race is really one of the funnest things I can imagine. The experience itself is incredible regardless what the data says at the end of the day. Just like days in life, some are better than others. I think this race was a great day even if I think I might have been able to finish a little faster.
Posted by bigdrop at 14:06