Well, I'm going back to Speedgoat in July. The race this year is a few weeks earlier than last year. I haven't read why but I don't think there's going to be a problem. I guess there might be some more snow than usual but who knows if that will affect the course at all.

Last year's Speedgoat 50k beat me up pretty good. It was the first race where right in the middle I was thinking "what would happen if I just stopped right now and called it quits?" Well, I didn't call it quits and I did pretty good overall for myself. I do remember getting to the highest point in the race and not even thinking about pace anymore. In fact, I was quite tired, upset and just wanted to be done. I had some guy take a picture of me at the top and I don't know if it was him or someone else who was sort of prodding me to not stop or slow down (even for the picture) and keep going and in my head I was just thinking "shut up." Here's a picture of that point. Not a lot of joy on my face. 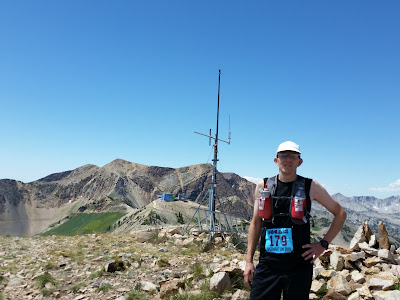 
But of course I have no intent of letting the race get the best of me and I felt like I have had a score to settle with the race if only to improve on my time a little.

So that's coming up soon and then I don't have another race until the St George Marathon on 1 October.

So will it be the Huntsville Marathon? Right now it's 2 weeks before SGT and I think its a decent price and a good choice. Other than that there's a few other races that are really tempting. Kat'cina Mosa 100k? Or the Morgan Valley Marathon?

Going to admit that no one is really reading this but on the off chance someone out there actually has an opinion on what race I should or should not run, let me know!